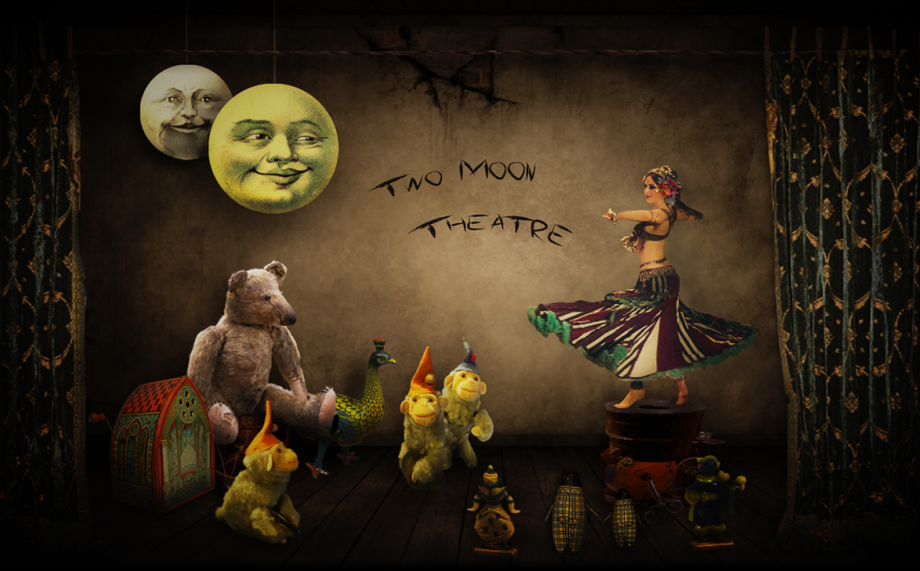 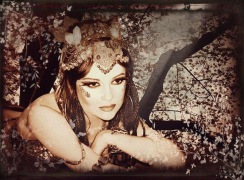 Known for her archetypal approach to performance craft, her style is both feminine and fierce, ancient and modern, sacred and strange. 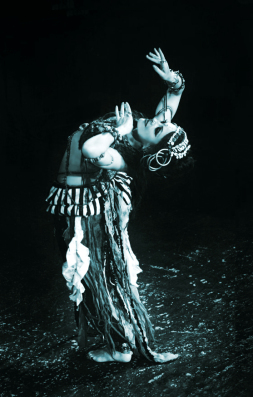 A popular and sought after teacher, Moria has developed a unique methodology and approach to belly dance control, the foundation of which is her trademark teaching style: Muscular Belly Dance Technique (MBDT). MBDT synthesizes the  intensity and precision that epitomizes Fusion Belly Dance isolation and individualism.

The diaspora of movement from which she engages and connects ancient dance via modern Muscular Belly Dance Technique creates innovation in movement, increases the palette of movement art, and explores ancient methods of physical language and body articulation to create an exquisite and rich pastiche of original and experimental dance.

Moria researches world temple dances by traveling to countries along the ancient trade routes that connected Asia and the Indonesian and Polynesian islands with India, North Africa, Mesopotamia and early Mediterrnean civilizations over 5,000 years ago.  Finding seed movements that are linguistic tags connecting an ancestry of ancient dances going back millennia, her performances and trademark style represent a conversation of various ancient temple dance technique as it has survived and developed through the ages.

Moria has traveled to Thailand, India, Cambodia, Singapore, China, Hawaii, Tahiti, Easter Island, Morocco, Egypt, Turkey and beyond to learn the oldest styles of temple and sacred dance and incorporate those experiences into her field of study, performances, and workshops.  Because of her eye witness and first hand exposure to the lands, people, philosophies, and traditions of the pockets of the Earth that still hold ancient dances intact, her research is unique, genuine, and personal. 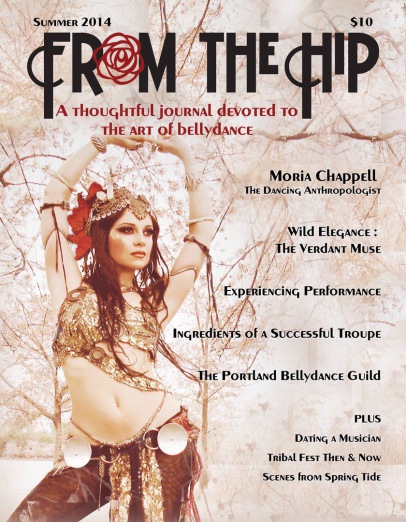 A fusion belly dancer since 2001, Moria became a principle dancer, and subsequently the Artistic Director, for the world famous Bellydance Superstars from 2005-2015.  She is heralded as an innovator in choreography, costume and makeup design, and as a creator and pioneer of fusion-art that focuses on Temple and Sacred Arts dance. 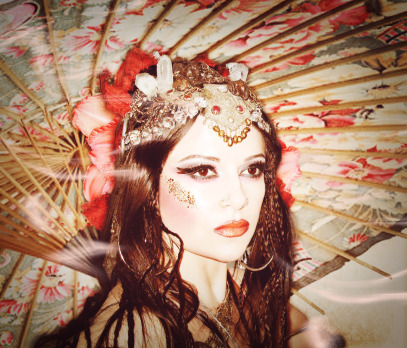 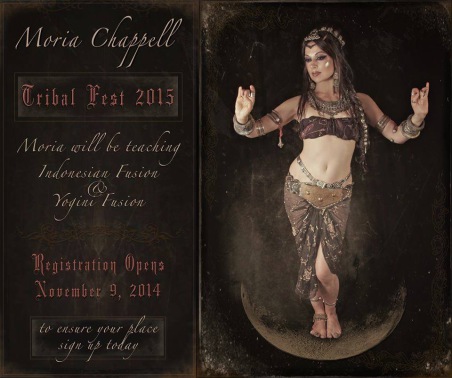 Moria is currently writing a book on the 64 Yoginis Tantric Temple with her mother Dahna Koth, a lifelong

researcher of world mythology and ritual theatre.  Exploring the notion that temple dances from around the globe at one time shared a common ancestral mode of goddess worship out of which belly dance, temple dance, and sacred movement were born, this book reveals hidden symbolic meaning surrounding the Yoginis' poses, hair styles, order of position, weapons, jewelry, animal associations, and potential movement.

While Moria Chappell is featured in multiple performance and instructional DVDs via The Bellydance Superstars, her most current work is available via current and on-going online classes.

Moria has created five full length, theatrical belly dance fusion shows: Nocturnal, Incantation, Blespheme, Gorgon, Elements, Mandira Luum, and Valkyrie with a 6th and 7th currently in production titled respectively Inanna, and Siren .  They featured a cast of fellow Bellydance Superstars core dancers and devoted belly dance colleagues from around the globe with whom she collaborates.

Incantation was accompanied by operatic vocals and a 10-piece live Balkan Band representing a first of its kind in theatrical belly dance performance. 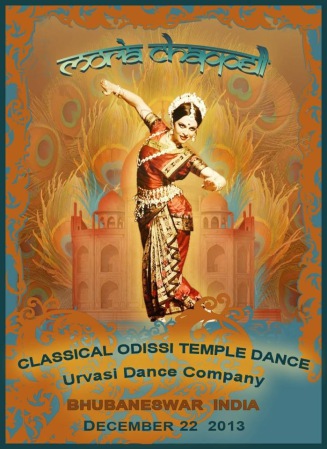 Moria Chappell is also a principle dancer, teacher and Assistant Director of Urvasi Dance Ensemble, an Odissi Indian Classical Temple Dance troupe founded and directed by Guru Ratna Roy who is a professor and Lifetime Achievement Award recipient in the field of preservation and continuation of the Mahari style of Odissi Classical Indian Dance. 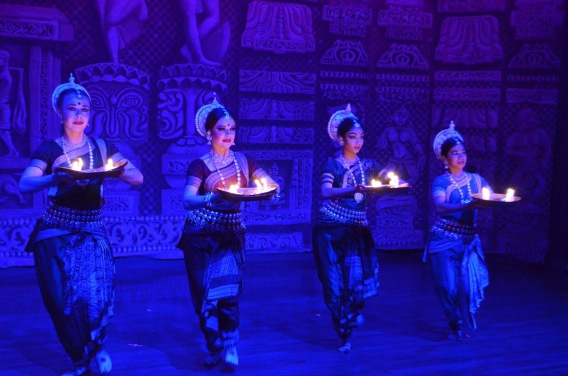 Moria moved to Washington State in 2010 to continue the training and development of her Classical Odissi Indian Temple Dance technique and knowledge with Dr. Ratna Roy exclusively.

Characterized by the blending of spirituality and sensuousness as well as the extremely lasya (meaning "supremely graceful and smooth") upper torso movement, Mahari dance themes are woman-centered, whether it be the Mother Goddess herself or famous women from the epics of India. A powerful and beautiful women’s dance tradition, the Mahari style of Odissi dance was crushed in the 20th century.  Dr. Ratna Roy is one of the few teachers still alive to have studied directly under the Maharis themselves and remained exclusively in the tradition of the Maharis throughout her ongoing career via her teacher, Adiguru Pankaj Charan Das.  Dr. Ratna Roy teaches on-going weekly online classes in her style, as well as workshps, and performances featured within the US and India. 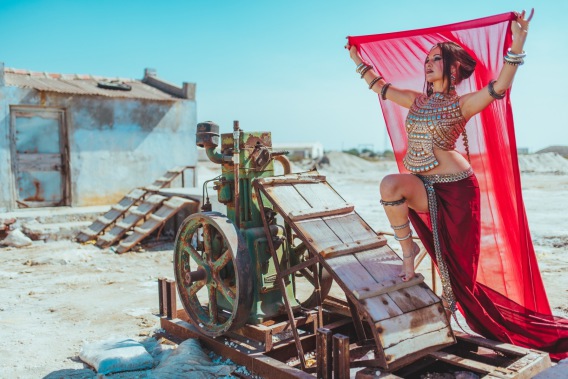 Moria at the Red Salt Mine in Gujarat, India 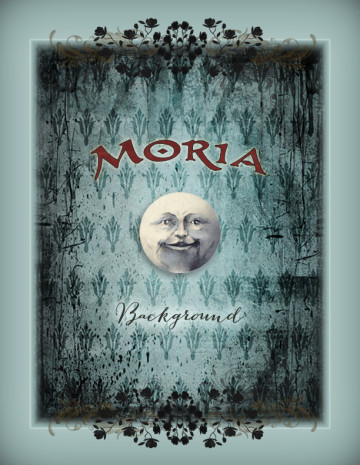 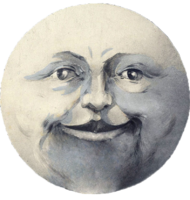 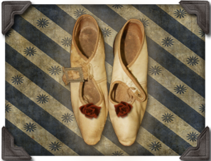 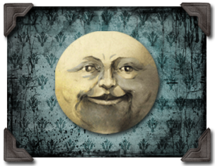 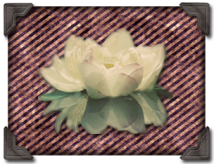 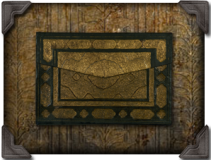 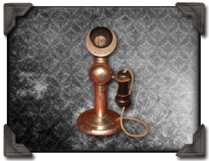